History Of Our Three Churches

Click here for an essay written by Ian MacKenzie on the History of St Declan’s and St Edward’s.

When Fr Rollo Enright took over the Parish of Rochedale in 1974 there was one little church in the Parish – the historical St Declan’s Church.  St Declan’s was built in 1865 for the early Irish immigrants of Logan and was initially called the Church of the Assumption and began the Catholic pioneering spirit of the Logan district.  The Church changed names and sites in its interesting career – in the 1940’s it was known as St James Church.  From its original site of 1865 it was floated down the Logan River about the turn of the century and from there it was shifted to Eight Mile Plains in the 1950’s where it eventually served the new Parish of Rochedale and Daisy Hill.

The new parish of Daisy Hill used St Declan’s for worship when the Parish began in January 1978 with Fr Leo Burke as its first Parish Priest. 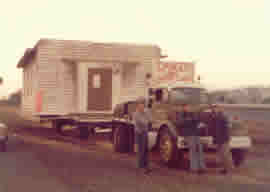 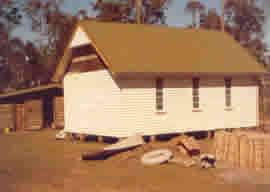 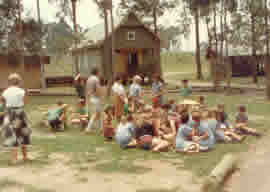 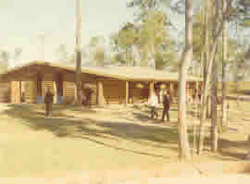 Before Fr Leo Burke arrived to take over the Parish, Fr Rollo Enright realised a dream he had when he first arrived at Rochedale.  That dream being to use timber in the Daisy Hill area to build a Church.  The slab of the new Church was laid before Fr Leo came to Daisy Hill and trees had been felled and cleaned and were in the process of being prepared for the unique log cabin church.  A plan was drawn up in 1977 by Pat Grosvener, Mike De Sousa Roque and Paul Lambert.  Many Parishioners were involved in the process of preparing the logs and Harry Vlug was engaged to build the new Church.  After many working bees and lots of Parishioners involvement the new St Edward’s Church was opened by Archbishop Rush on April 30th 1978.

The Log Cabin Church of Daisy Hill was known throughout Australia and witnessed the growth of one of the most active Parishes of the Brisbane Archdiocese.  The unique log style aroused a closeness in worship and a warmth that reflected the welcoming style of the Daisy Hill parishioners.

As the numbers of Catholic families in the Daisy Hill area continued to grow towards 1,000 the little log cabin had to be expanded.  The first extension was completed in 1985.  In 1987 Bill Byrne, architect, designed another extension to include a verandah / gathering area to allow the congregation to gather after Mass.  Work on the verandah began and weekend working bees set about completing the colonial style addition which complimented the log cabin building.  Before Christmas of 1987, Gary Bell had half completed the paving of the verandah area.


At the Parish Masses on the weekend of January 9th/10th 1988, the Parish celebrated the 10th Anniversary of the Parish.  These were the last Masses to be celebrated by the Daisy Hill family in the now famous Log Cabin Church.

Fire – 11th January 1988 -  After midnight, a nearby resident returning home after work noticed the destructive flames leaping out of the windows of the much loved church.  The fire brigade could not save the Church which was totally destroyed.  The news of the Church’s destruction spread rapidly receiving wide media coverage throughout Australia.  From the youngest to the oldest in the Parish, there was great sadness at losing a treasured part of our life.  The Parishioners were consulted as to how we should build again and wisdom, plus the fear of a similar fire, prevailed and saw the decision made to rebuild a larger church.

Open Air Masses.  With no church to celebrate Mass, the Parish began celebrating Mass in the school assembly area under tarpaulins using borrowed and donated Mass-kit and furniture.  From there our Mass Centre moved from the parade ground of St Edward’s School to John Paul College.  Every Friday afternoon the students of the college moved seats into the Mass Centre and staff arranged altar furniture and sound equipment.  For five months Mass was said at John Paul College until their annual art show necessitated a move to the partially completed new Church on June 25th; (the roof was finished that afternoon). 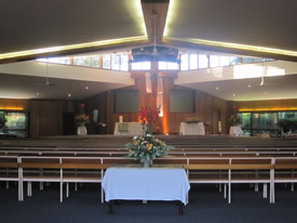 St Edward the Confessor – new church 1988
Again, a unique Church was built being about twice the size of the original Log Cabin Church with wide verandahs to accommodate overflow crowds.  A few parishioners came up with the idea of using what nature provides in the form of mud bricks.  Dave Peebles and Dan Cooper led a large number of parishioners who worked tirelessly every Saturday for months to produce the unique concept of a mud wall in the chapel of the new church.  They were not discouraged even when rain and vandals ruined some of the bricks.  (Vandals eventually destroyed this wall with a fire hose in 2000.)

The altar of the Log Cabin church was retrieved from the burnt out shell, and is still in use today in the prayer chapel.  This altar was constructed out of a single slab of red stringy wood and supported on a base of tallow wood which had grown on the original site.

All the concepts of the Vatican Council’s renewed vision of liturgy are incorporated in the new Church:  a Eucharistic Chapel for the reservation of the Eucharist and for quiet prayer, a baptistery large enough for child and adult immersion, screens on the walls to project hymns to encourage everyone to join in the singing of hymns, comfortable seating and warm colours.  The design of the Church is to keep everyone included in the celebration. 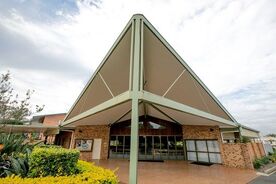 Parish of St Edward the Confessor
The Parish of Daisy Hill has come a long way since its humble beginnings.  Many original Parishioners still celebrate Mass here, many have moved on, and many more ‘new’ parishioners enjoy the atmosphere, spirit and hospitality that has grown to be part of St Edward’s Daisy Hill.

It is through all the hard work, dedication and commitment of the Parishioners of St Edward’s over the years that we can now enjoy what we have today.  We sincerely thank all past and present priests, staff and parishioners for your generosity, and we look forward to the future.